These systems are designed to:

This Permadur Series 2550 Plate/Multiple Part Handling System was built with 50ea. BP-1600 Lifting Magnets on a 30’ load beam. The Magnet are fixed on 14.25” Centers. The Controller provides Selectivity by Magnet Row, 25ea., and by Magnet, 50 each.

Permadur’s Exclusive Safety Indicator Lighting System confirms the Magnets have attached to the load in preparation for a safe lift. This Controller was also built with System ON/OFF/HIGH Radio Controls in addition to hard-wired PB Pendant Controls positioned at both ends of the load beam. As yet another control alternative this System was wired to support ON/OFF/HIGH System Controls via the Crane Pendant or Radio Controller.

Finally, the System Load Beam supported attachment to a single hook crane via a 6 Part Sling Suspension with a Holding Rack when the System is not in use. 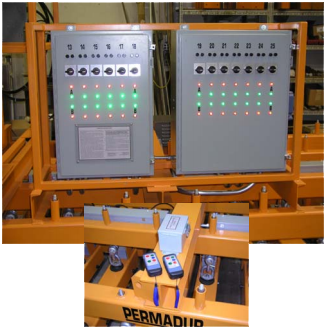 Let us do the heavy lifting.

Please submit your information below and a Permadur Customer Service Representative will review the request and contact you shortly.